Treadmills are NOT for Dancing! 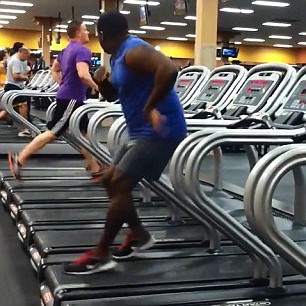 How refreshing it is when we come across someone who uses everyday objects in a unique way! They may not necessarily be the first or the only, but it does take bravery to actively go against the grain. That is to say: coming up with a novel idea is one thing, actually doing it is another.

This is an ode to the brave and courageous!

A man in Florida exemplified this way of life when he was seen using the treadmills at the gym for something other than running. After seeing this man regularly at the gym, a Youtuber named David Wilson decided to record the dancer and share the joy of this vision with the world.

We often hear people saying things like, “I don’t go to the gym because it’s boring! Who wants to run in one direction for 30 minutes looking at the same thing?” Wherein lies the true problem dear speaker?

Who said you must use your treadmill in one way and that way only?

In a curious study done with a troop of chimpanzees, researchers hung bananas from the top of the cage and waited for the chimps to climb a ladder to take them. The researchers would then spray the chimps who ventured upwards with water, deterring them from trying. Other chimps were periodically added to the troop. Unaware of the coming torrent, they would start climbing up the ladder. Having been exposed to the adverse reaction, the veteran chimps would stop the uninitiated from trying so as to prevent them from getting sprayed too. Over time, the researchers slowly phased the veterans out from the cage until none of the original chimpanzees who had actually been sprayed with water remained.

A fresh batch of enticing bananas was still regularly hung in the middle of the cage, reachable only by the ladder. Three guesses about how the new chimpanzees behaved…

Yes, they stopped each other from trying to reach the bananas, not even knowing why.

This is a sad story.

In another anecdote people tell each other, a young girl was watching her mother make a beef roast recipe passed down for three generations. She observed how her mother first cut the roast in half and put it into two smaller pans before putting them into the oven. She asked her mother why she did this and was told that the girl’s grandmother did it this way.

This is a disappointing story.

One would hope there was some magical, almost forgotten 19th-century reason as to how cutting it in half greatly improves the flavor and moistness while also halving the cooking time. Alas, it was not so.

Creativity demands that we question the world around us!

Do not take for granted that most of the information handed down to us was created for very specific reasons by people facing very specific circumstances. Look at the animation movie Coco (Spoiler alert). A little boy is forbidden from making music because one of his ancestors was scorned by her husband whom she thought had abandoned their family to pursue his musical career. She then sought to protect her family and future generations from the same heartache by outlawing any exposure to music.

The crux of this movie came in the form of a little boy who questioned this status-quo and found there was more to the story than handed down across generations!

But before you consider starting an uprising, take caution about doing anything out of rebellion. Question, yes. Judge, no. You were not there when those decisions were made, and their thoughts were put into practice. Who of us can definitively say that we would have made different, not even to mention better, choices were we in their position?

This got serious, fast! But it is worth noting that it is healthier for us to make decisions out of a desire to improve, rather than to break down.

All there is for us to do is do the best with what we have.

You would most likely agree that the treadmill dancer in the video above hardly looks as if he is rebelling against anyone. We just see a man doing a dance to music only he can hear on a treadmill in a gym. Wouldn’t more people be inspired to exercise if it were plainly much more fun to do than we previously thought! I myself am getting more inspired to hop onto a treadmill with my favorite tunes in my ears!

And in the subsequent years, there has been somewhat of a flurry of treadmill dancers popping up. Some fitness trainers even incorporating it into their Zumba classes!

As was said when we started this chat together: it is so refreshing to know that the world can be full of the wonder we always hoped it would be! It makes one so grateful for creative means of sharing thoughts and experiences like YouTube where the world can grow by learning from each other.

We encourage you to be bold with one creative application you have been itching to implement in your life. There’s no pressure! Do your best with what you have, and you will no doubt find yourself seeing the world with increasing wonder.

Are you looking for techniques and insights to use to inject creativity and courage into your business or family? We would enjoy working with you towards a courageously creative future.

0 responses on "Treadmills are NOT for Dancing!"