The Creativity Quiz: True or False?

The Creativity Quiz: True or False?

1. What is the link between creativity and intelligence?

The Oxford Dictionary describes intelligence as intellect, understanding and if you are intelligent, you show a ‘quickness of understanding’. Is this really all there is to it? What are the views of people in general? Here are some to think about:

For many years it was accepted that there was a single, general intelligence which is reflected by our IQ (intelligence quotient). This score is determined by a few short questions which test how clever we are and, even more depressing, we are assured that it is nearly impossible to improve on our IQ score! One thing that was certainly never mentioned in the same breath as intelligence, was creativity. Creativity was really the stepsister that had more to do with painting a nice picture and making cute little cushion covers.

Howard Gardner, author of Frames of Mind (1998), broke the good news to the world that the belief of decades that there is only one intelligence, is false. What he proposed was that there exists a number of different human intelligences – as many as eight, in fact. He is working on adding a ninth. These intelligences are: linguistic, logical-mathematical, musical, spatial, bodily-kinaesthetic, intrapersonal, interpersonal, naturalist and the ninth, existential.

Intelligence and creativity are two very intricate functions that are very closely associated with each other. What was the stereotype:

Looking at the different intelligences, you have to see how they interconnect. What is the truth that has been revealed?

Remember what Thomas Edison had to say?

‘Genius is ninety percent perspiration and one percent inspiration.’

2. Do my intelligence and creativity have anything to do with the size of my brain?

Somebody once wrote we only have a body so that we can carry our brains around! Well, that could be an over-statement. But there is no getting away from the fact that the brain is the BOSS, the controlling power, the center of not only our thinking but our feelings, our spirituality, our creativity. To know more about the brain is therefore not a bad idea.

The short answer to the question is NO. How big is the brain? The actual size varies from person to person (males normally have bigger brains than females), but the physical size has nothing to do with ‘clever/creative or not’. People often talk about the brain as a built-in computer. The truth is, find the most advanced computer, compare it to the brain and it will most certainly come off second best. Your brain only weighs about 1.5kg but contains around 100 billion cells called neurons. Neurons cannot divide and are not replaced when they die (about 10% do just that), but don’t fret. Your brain won’t shrivel up till there’s nothing left, because even when the cells decrease, we can still manage to grow our brain. This is how it works:

3. Is it true that we have two brains?

Well, that really depends on whom you ask. Dr. Paul McLean was the man who said we actually have three brains. He called this his Triune Brain model. He believes that each layer has built up over time as our human needs have grown and required more advanced thinking. This is how he divides the brain:

Of course, the three layers of the brain don’t function in isolation but are constantly communicating with one another. For example, when you experience a great surge of joy for receiving a raise at work (limbic brain), but your cortex takes over and warns you that you can’t grab the boss and give him/her a big kiss! That’s where the difference between lust and love come in too. The one is limbic; the other turns into appropriate behavior in the cortex. People suffering from road rage obviously have a problem getting these two brains to work together.

The brain also shows another distinct division: the two halves or hemispheres. So, why does the brain have two halves? Many have wondered over the years. References to the dual nature of the brain are found in very early manuscripts. Hippocrates concluded, ‘The brain of man is double.’ Believe it or not, it was in 400 BC that he wrote this after making the assumption that loss of speech was connected with damage to the left side of the brain.

In 1864 a French surgeon named Paul Broca came to a similar conclusion after observing that patients with aphasia (loss of speech) had damage to the left brain.

But the real breakthrough came nearly a century later. In the 1960s, Philip Vogel and Joseph Bogen (and others) performed their breakthrough split-brain surgery on a few epileptic patients. They cut through the corpus callosum (a layer of nerves) between the hemispheres to help curb the massive seizures. Roger Sperry (who received a Nobel Prize for this work in 1981 with his colleagues Bogen, Vogel, and Gazzaniga started the most amazing research on the brain ever done. Tests on these patients revealed that the two hemispheres control vastly different aspects of thought and action. They found the left (controlling the right side of the body) is dominant for language and speech and for analytical and logical thought, while the right (controlling the left side of the body) excels at visualizing, holistic and unstructured tasks.

Their breakthrough also proved that the corpus callosum, the connecting channel between the left and the right brain, is responsible for the essential communication between the two hemispheres of the brain. For the first time, it was official: the two sides were different, processed information differently and controlled different sides of the body. The picture they came up with, looked something like this: 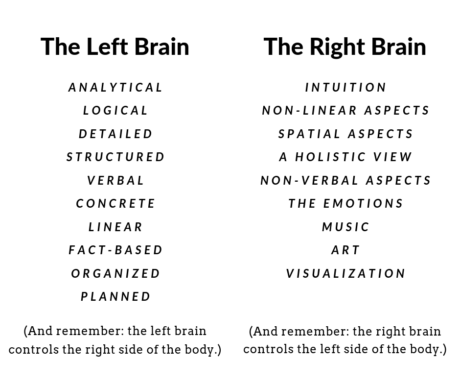 Another question remained, though: do people have brain preferences? Do we favor either the left or right brain in our thinking and doing? This started off many decades of research by people such as Ned Herrman, Jacqueline Wonder, Priscilla Donovan, Beverly Moore, Kobus Neethling, and others. The answer was the same, and a resounding YES. We will discuss these preferences in a later chapter in more detail, but for now, it leads to our next question:

In a way, we have already answered part of this question. To be clever and to be creative are not necessarily two different things. As we have pointed out, scientific cleverness often needs intuition, creative insight and the ability to visualize while the artistic and innovative act needs some reasoning, logic, and analysis to come to fruition. Leonardo da Vinci is a brilliant example of ‘clever in both sides of the brain’. He was famous for his scientific theories as well as his artistic innovations.

For many decades it was believed that creativity could only spring from the right brain where we process information visually, unstructured and spatially. We now understand that creativity as

LOOKING AT THE WORLD WITH A FRESH PAIR OF EYES…

…can be associated with both sides of the brain. Designing something new in the field of technology, science, finance or administration (left brain processes) must surely be termed creative.

So, what about the idea that people who favor right brain thinking will be more creative? Certainly, to favor thinking that is less rigid, less precise, less structured could more easily lead to the flexibility needed for creativity, but that is not the whole story. Once creativity is encouraged and routine and habit broken, everybody can be creative. You may approach creativity differently, you may emphasize elaboration more than flexibility in the creativity process, you may ‘perspire’ more than ‘inspire’, but that still doesn’t mean you are not creative.

5. If we all have the potential to be creative, why are some creative and others not?

In a later blog, we will talk at length about things that block our creativity. But let’s answer this question in short here as well. As children, most of us are very creative. We live in an imaginary world, see possibilities in most things, we do not internalize our mistakes and therefore go on believing we can conquer most obstacles.  So, what happens between those splendid years and now? The results of Paul Torrance’s creativity test (the TTCT), used worldwide to test people’s creative abilities, are certainly an indictment of parents and teachers. These results have shown that

It is difficult to stifle the child’s spontaneous creativity; unfortunately, the opposite is true as we grow up. It seems far easier to block and stifle creativity in older children and adults than to make it flourish. Why are some people seemingly not creative? Because they

Hopefully, we will answer any remaining questions in the next blogs.

To Take Along from This Chapter

‘Einstein’s space is no closer to reality than Vaan Gogh’s sky.’